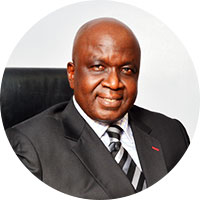 Mr. Rickey M. Tarfa, Senior Advocate of Nigeria, (SAN) is the Principal Counsel and Head of Practice of the Firm. He graduated from the University of Maiduguri with an LL.B Hons in 1986, He attended the Nigerian Law School, Victoria Island, Lagos and was called to the Nigerian Bar in 1987. Mr. Rickey Tarfa obtained his Master of Laws Degree from the University of Lagos, Akoka, Lagos in 1990. He has attended several courses locally and overseas including the 29th Maritime Short course Southampton, United Kingdom in 2002.

Established in 1988 with the foresight of ranking amongst the foremost law firms in Nigeria in terms of excellence in the provision of quality legal services to clients. (Learn More.)